How To Have A Green Romance

Four Irish Movie Comedies You May Have Missed

Irish movies are famous for many things; – endearing love stories about pretty country girls and strong city boys, rousing historical sagas with valiant heroes, kindhearted priests, hungry mischievous orphans, hard-working women with a fatherless child, misdirected fatherless children, the IRA, gangsters, policemen, drunks and leprechauns. It’s hard to find an Irish film that doesn’t rally an audience with one of those compelling themes and endearing characters; however, there is one classification – The Irish Film Comedy that sadly has become an all too neglected genre, at least amongst the most serious filmmakers. Having said that, I’ve chosen four delightful Irish film comedies for your consideration. You may have missed them in theaters or on TV, but they are great Irish classics, definitely worth seeing. 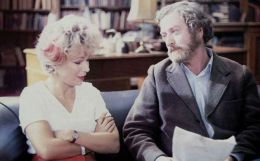 Directed by Lewis Gilbert and based on the long-running London stage hit by Willy Russell, Education Rita is a bit of a twist on the Pygmalian/My Fair Lady Theme. Starring the delightful Julie Walters in her first film role and seasoned actor Michael Cain, Education Rita is a sassy, smart and uplifting comedy that’s perfect for all ages.

Rita (who’s real name is Susan), is a hopelessly naïve hairdresser who hungers for knowledge and aspires to rise up from the mediocrity of her dreary working class existence. Although married and age 24, Rita enrolls in an Open University course in English literature. There she meets Frank Bryant (Cain), an often intoxicated, divorced and disheveled professor who reluctantly comes to her rescue.

When we’re first introduced to Rita, she’s a spunky little aspiring student with no end of intellectual curiosity and energy. She does look a bit of a tart with her pink streaked hair and short tight skirt, but she’s a child of circumstance. That’s not to say Rita isn’t smart. Despite the fact that she thinks Hamlet is a breakfast dish of scrambled eggs and sausage, she surprises us with her unassuming intellectual savvy and soon proves to be an inspiration to her tired, disillusioned tutor.

You may ask, why is this considered an “Irish” film? I’ll admit, there are no Irish accents, no kindly priests and no fatherless children. The fact is the entire film was shot in Ireland. The “university” is really Trinity College in Dublin, the local café is really Dobbins Wine Bistro and many of the scenes were shot at St. Patrick’s College in Maynooth. If you read the credits, you’ll also see lots and lots of Irish names. 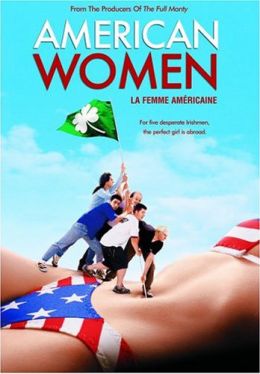 Perhaps one of the reasons people don’t know about this charming romantic comedy from the Producer of the The Full Monte is because it has two titles. Originally called The Closer You Get , the story is about a group of regular Irish blokes who think the local girls are just too ordinary for their standards. Their isolated Irish village just isn’t turning out the likes of Bo Derek and other “typical” American girls, so they come up with the idea of posting an add in the Miami Herald inviting the saucy women of the U.S. to pastoral Donegal for a good time and a prospective husband.

The ladies of Donegal, plain though they may be, are a group of clever lasses. They devise their own plot to outwit the lads and to prove that the grass isn’t always greener and the girls aren’t always more desirable on the other side of the ocean.

There have been sociological studies of Irish rural life and the “slim pickings” left to the local men in search of wives. It seems many women emigrated to larger cities in search of jobs and a life that didn’t revolve around the local post office and sheep herding. Donegal is one of those exquisite pastoral villages virtually left unchanged for decades. It’s a great place to visit, but you wouldn’t necessarily want to live your entire adult life there, unless you’re a priest, a sheepherder or a Leprechaun.

The Closer You Get was director Aileen Ritchie’s debut film and it stars Niamh Cusack, Ian Hart, Sean McGinley and Ruth McCabe.

You can buy or rent this film on Amazon. 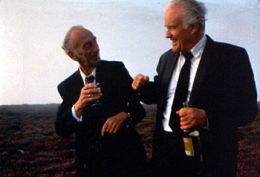 A gem of an Irish Film Comedy, Waking Ned Devine is one of the funniest, most exuberant, uplifting movies to come out of Ireland in decades. Like American Women, it takes place in a small Irish village where everybody knows everybody’s business.

The story beings when the luck of the Irish befalls one Ned Devine who discovers he’s won the Irish Lottery. Alas, his joy overcomes him and he drops dead from the thrill of it all. The entire village is heartbroken at the passing of good man, but they’re not stupid. They quickly devise a brilliant plan to cover up Ned’s untimely death so that they can claim the winnings and collectively enjoy in his unrealized good fortune.

If you thought “Weekend at Bernies” was funny, Waking Ned Devine, is easily its Irish brother of a comedy, but it’s even better.

You can buy or rent this film on Amazon. 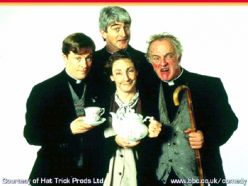 Okay, Father Ted isn’t exactly a movie, but it does fall into the category of  Irish Film Comedies because it was shot on film rather than video. This outrageous and surreal television series that aired in the 1990’s is so funny, even the stodgiest of couch potatoes will fall off the sofa laughing. I personally know people who can watch all 24 episodes, stopping only for a beer and the occasional bathroom break.

The series takes place in yet another remote pastoral Irish village off the west coast called Craggy Island, only this one is completely fictitious, probably not to offend any Irishmen’s home town. The actual parochial house used in the series is on the mainland in County Clare Ireland near Lisdoonvarna.

Anyway, getting back to the review, Father Ted is about three priests, all of them disgraced and exiled from their respective parishes for one absurd reason or another but mostly because they were just too outrageous and too laughable for the real world of Catholic priesthood.

Starring the late Dermot Morgan as Father Ted Crilly who’s a bit too fond of the good life; Father Dougal McGuire (Ardle O’Hanlon), a simpleminded, hopelessly naïve young man who sleeps with a teddy and wears a wooly sweater over his vestments; and Father Jack Hackett, who can only be described as a lecherous, foul-mouthed, and perpetually soused priest.

Mrs. Doyle played by Pauline McLynn, adds even more color to the cast as the dowdy, doting housekeeper who can’t seem to serve enough tea.

One might think that good Irish Catholics would take offense to the antics of Father Ted, but not so. The show is brilliantly written and the direction of the biting satire goes well beyond priests, nuns and other esteemed members of the clergy. The lighthearted society- bashing humor expands onward to include psychotic television celebrities, dishonest shop-owners, zombie-like housewives, untalented song writers, over-zealous feminists, bunny rabbits, milkmen and of course football (soccer) stars.

Hat Trick Productions produced only 3 Seasons of Father Ted for British TV’s Channel 4, as Dermot Morgan tragic death from a heart attack at age 45 gave certain completion to the last episode of the final Season.

It is heartening to know that the series went on to become one of the most popular TV shows in Ireland. Father Ted and the entire Irish cast live on into Irish film posterity through the availability of the series on DVD, which you can buy or rent on Amazon. 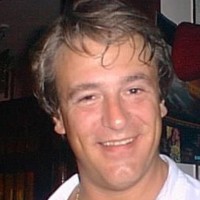 Gary D. is an energy and telecom consultant who specializes in utility services and green energy.
Follow Gary on Google