Four Irish Movie Comedies You May Have Missed

Getting Rid of Ants with Organic Pest Control 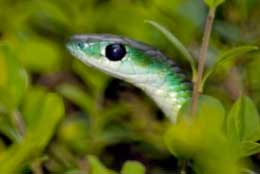 Snakes and the City

I'm a city girl who has learned to live in the near-city suburbs; trading sidewalks for somewhat starrier nights, bus fumes for barbecues and traffic meters for mall parking. As a green-minded citizen of mother earth, I also realize that living here is a privilege and that many mammals, birds and yes, even reptiles have been displaced from their natural habitats because of man's penchant for urban sprawl. I still gasp when I see a snake, but I've learned not to scream, nor to be fearful, nor to associate all snakes with the devil; in fact, I've learned to say, “Hi there little friend”, even if he or she isn't very little.

Frankly speaking, there are no “bad” snakes just as there are no “evil” animals on our planet (although some homo-sapiens are still under scrutiny). There are venomous snakes that pose a significant danger to humans should the snake be surprised or disturbed, but the fact remains, out of approximately 120 species of snakes in North America, only four of them are venomous. They are the Rattlesnake, the Water Moccasin (Cottonmouth), the Copperhead, and the Coral Snake. 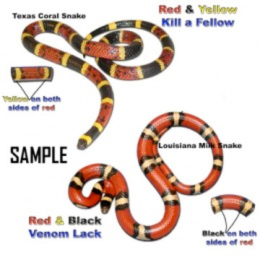 Snakes can be tricky to identify, but you should know that all of North America’s venomous serpents except for the coral snake have vertical pupils, so if you spot a snake with “cats” eyes, it's a good idea to keep away. Coral snakes have round pupils and they  have colors similar to some milk snakes and scarlet kingsnakes.  Farmers have a saying when it comes to identifying coral snakes, “Red next to yellow, kill a fellow. Red next to black, venom lack.” I'd still call a professional if I saw a red, yellow and black striped snake.

The truth, is that unless you are a herpetologist there's no simple way to identify a venomous snake. The best way to check

whether a snake is venomous is to compare the snake in your garden to photos of venomous snakes in your area. Just Google “venomous snakes of (your state).” You can also call your local County Extension Office . My divider bar below displays pictures of North America's venomous snakes.

Australia is the only continent that has more poisonous than nonpoisonous snakes. If you live there, you probably know more about snakes than I do, but hopefully you'll still find this snake primer valuable, or at the least entertaining.

Next Page….What Do You Do If You See a Snake?