Creating a Garden for Your Dog

Getting Rid of Ants with Organic Pest Control 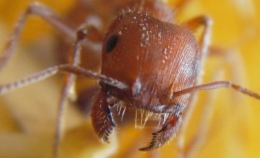 How to Kill Ants in Your House – A Safer Way

Even the cleanest of homes can be invaded by ants. They enter the house through seemingly invisible entry points and find their way to your spotless kitchen, bathroom and even your bedroom. If you have treated one room for pests, chances are they will seek out other rooms in search of food.

There are effective organic alternatives to traditional ant control methods and I have personally tested out those mentioned here, but first it's good to know something about the enemy.

An Army of Ants

There are over 22,000 species of ants that have been discovered all over the world. Ants are considered to be social insects that are highly organized. They live in colonies. Unless you live in Antarctica, Greenland, Iceland, or in remote parts of the Hawaiian Islands, ants are your neighbors. Clever little creatures, ants have adapted to most every ecosystem on Earth.

Ant colonies consist of a Queen (usually just one, who eats, mates and lays eggs); some fertile males called “Drones” and an army of sterile females, called “Soldiers” or “Workers Ants” who gather food and protect the colony. Australian Meat-Eater ants  have an age-related hierarchy where they take on different roles at different ages, but the roles are the same as in other colonies.

The Worker/Soldier ants are the ones that make their way into your home in search of food and water. You can thwart the invasion of just about every species of ant organically by first following these standard rules: