Sexy Vintage Lingerie for Women of All Shapes and Sizes

A Gardener’s Guide to Weeds 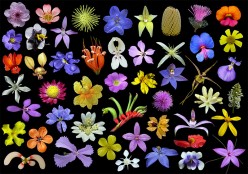 Is a weed really unworthy of being a resident of civilized landscapes? In the eyes of the universe all plants are created equal, but in the eyes of man, some plants are less equal than others and are classified as weeds. Some are even considered quite dangerous.

I have a love hate relationship with weeds. I even feel guilty about weeding the garden. It's like killing an ugly spider when I know he's probably been beneficial, eating scores of other insects who crawl into my shoes when I’m not looking. Yes, there are some beneficial weeds; and there are some weeds need to be brought under control, as they can pose a threat to our ecological system. More on that in a bit.

What is a Weed?

Webster’s dictionary defines a weed as “any plant growing in cultivated ground to the injury of the crop or desired vegetation, or to the disfigurement of the place; an unsightly, useless, or injurious plant.”

How could anybody love a weed after reading that definition? I have never cited the creator as a source, but I challenge anyone of any religious persuasion to think that a dandelion was created to be a detested plant, unworthy of being a resident of civilized landscapes.

Plants, like modern fashions, go in and out of style, and it is modern civilization that creates what is desirable and what is not.

What Came First…The Weed or the Plant?

You may be surprised to learn that the weed came first.

According to Alisa Rutherford-Fortunati founder of Gentle World,

“The ancestors of every common garden plant were once considered weeds themselves. That was until we discovered their merits and began to mold and tame their wild ways to suit our culinary or agricultural preference”.

Ralph Waldo Emerson posed the question in his Fortune of the Republic, 1878

“What is a weed?  A plant whose virtues have not yet been discovered.”

It may be true that all plants started as weeds, but many that were once cherished for their virtues have come full circle. 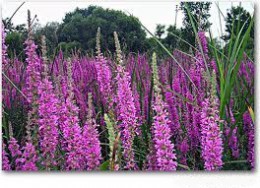 Consider the unfortunate Lythrum, commonly known as Purple Loosestrife. This willowy plant with pink flowers puts on quite a show along American highways, yet it has been placed on the government’s infamous noxious weed list because it grows so fast and is so difficult to maintain.

How did it get to the highway landscape in the first place? It was most likely planted in error, or seeds “escaped” from neighboring gardens.

I think some plants reverted to becoming weeds when men became lazy gardeners.

I recall with distain, an all too aggressive (and horticulturally inexperienced) landscape maintenance man who weeded out the tender shoots of my glorious Amsonia; a delicate shrub I had planted from seed in early spring. Slipshod landscapers can be just as obnoxious as those noxious weeds.

What is a Noxious Weed?

Some plants are native to a region and have been happily growing there for centuries. Others, like Purple Loosestrife were introduced from other countries by unenlightened importers; They were planted as seed or seedlings because they were initially pretty or tasty or in some way desirable.

Regrettably, plants placed artificially into a foreign ecosystem have side effects. They become invasive and some can even destroy the ecosystem.

There are many plants that share a fate similar to the Purple Loosestrife. Otherwise attractive plants that prove themselves to be overly aggressive become plant criminals and are put on the government noxious weed list.

There’s even a U.S. government agency called the Plant Conservation Alliance’s Alien Plant Working Group that puts out a “Least Wanted” list of Alien Plant Invaders of Natural Areas. It's a deadly name for many pretty plants that damage native ecosystems simply because they are too difficult (and expensive) to control.

Some noxious weeds are also toxic weeds that if ingested, are fatal to humans and livestock; however, I can’t help but feel a bit sorry for non-toxic noxious weeds. They are after all, just overly prolific.

There are hundreds of plants on the noxious weed list in the U.S. alone and most of them are non-native plants that were brought from Europe and Asia.

One of my favorite trees is on this luckless list of plants. The Silk Tree or Japanese Mimosa [Albizia julibrissin Durz] now grows wild along southeastern roadsides. The soft fern-like leaves and fragrant flowers, resembling pink pom-poms put on a spectacular show every summer but the show is likely end. Because they have made it to the noxious plant list, they are no longer properly managed by government roadside maintenance programs. Instead, they are hacked down to a stump or chemically controlled.

Not all plants considered to be weeds are bad for your health or the environment. Clover, acts as a living mulch adding moisture and nitrogen to the soil.

Some weeds are even good to eat. Consider the lowly Dandelion.

Not only can you bring out your inner child by blowing the seeds into the wind, the young leaves and flowers are edible. They make a delicious addition to a spring salad, and they are high in vitamins A, C and D,  iron, potassium,  and beta-carotene. You can even make a detox tea from the leaves and roots. In the garden, they attract honeybees and repel destructive armyworms. Dandelions are just one of many beneficial weeds.

Other research published in the International Journal of Oncology suggests that the humble dandelion—the weed so many people hate—may offer new hope in the battle against cancer. 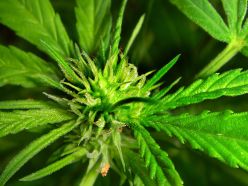 Cannabis may be an illegal and vilified weed throughout most of the U.S., but many believe the number of government regulations are worse than the number of cannabis abusers. Marijuana does have medicinal benefits for people suffering from glaucoma, nausea, migraines, multiple sclerosis and depression, and it is available for these purposes in some states.

In addition the Cannabis plant provides us with hemp fiber and pulp, hemp seed and CBD oil.

Cannabis has been taken off the noxious weed list in some U.S. states including Minnesota, Wisconsin, and Oregon so that hemp can be grown for industrial purposes.

Rather than blame the plant for bad behavior, I advocate a greater human awareness of the merits and growing habits of plants. If you buy a plant for the garden, ask the nursery about the plant’s characteristics, particularly if the plant originated from non-native soil. If you have dandelions in the garden, don’t spray them with herbicide; just make a salad.

What do you think?