Creating a Garden for Your Dog

Should Older Women Dress Their Age? 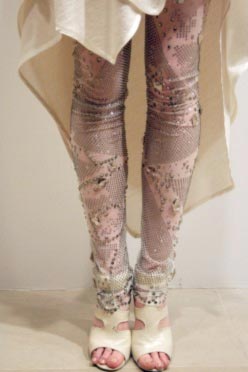 I don’t know who wrote the cardinal rule that said, “Women should dress their age”, but whoever it was, should be excommunicated and voted off the fashion savvy registry.

I have a close friend who is a devoted fashionista. She has great taste, a great body and a keen eye for design. What’s more, she looks right at home wearing whatever glam garb she puts together. It always reads as stylish good fun; at least it does to me.

It baffles me why some people within my social circle look upon my tastefully flamboyant friend with haughty distain; remarking that she dresses “like a woman half her age”.

Just because someone over fifty dresses with some creativity and chooses to show a bit of shapely leg doesn’t mean she is dressing inappropriately.

If you can radiate joy, who’s to say it’s improper? The fashion police? The moral majority? I suspect it’s just those who have lost their “joi de vivre” or, are simply jealous.

Perhaps I feel the need to rant about all this because I have fond memories of dressing up in period costume when I was a stage actor. I know how good it feels when you don those fancy duds. It’s like fine tuning your own spirit.

Clothing gives you energy! It vibrates with color, texture and the energy of its own spatial mass. It precedes you even before you enter the room. Your style is uniquely you no matter what age you may be. To police that creative energy is nothing short of criminal.

I have found that the most scathing critics of older women who dress creatively are women who are themselves past their prime. You know who they are. Some carry not only a few extra pounds, but the baggage of warped social graces where the stagnant rules of “proper dress” are still revered. Others are simply fashion snobs who think they have better taste in clothing than everyone else. They’re also the first to fish for compliments.

Am I getting off topic? Perhaps, but I do maintain that anyone who feels good about trashing another woman for looking inappropriately radiant, is not worthy of receiving a compliment, even if they do wear Prada.

In my opinion, (and I have many when it comes to fashion trends, there is no such thing as “appropriate” attire for older women. It’s like saying everyone over a certain age should wear sensible shoes and skirts no shorter than their knee caps. Why not just put a warning label on leggings saying, “wearing this product over age 45 can be dangerous to your image”.

There Are No Rules of Fashion

The fact is, everyone expresses themselves with their choice of garment, even those who haven’t a clue how to dress fashionably. To set rules on how one should dress is like telling you how to “be”.

As more and more baby boomers move beyond middle age, I think age itself will become more of an enigma. We’re already saying, “50 is the new 40”.  The modern mature woman sees that as an advantage. She knows she is a divine diva who deserves better than having to worry about archaic dress codes, raised eyebrows and the rules of dressing her age.