Fashion Trend – Fur is Back On the Runway

Is Modern Furniture and Modern Interior Design a Worthwhile Investment?

Designers Are Bringing Back the Glamour of the Past 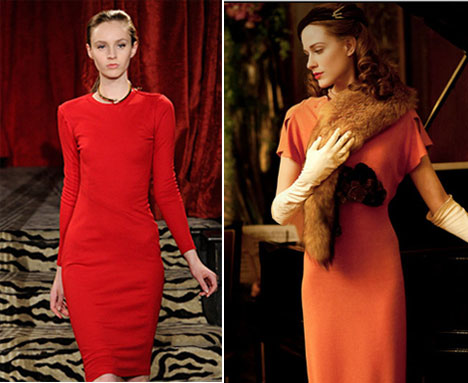 This season we're seeing a revival of fashion trends from the 1920’s and 1930’s – the sexy, silky, often beaded or fur trimmed evening dresses; the debonaire young men in their tweedy jackets or fabulous formal wear. Back then just about everyone who could afford it, dressed for success. Those who couldn’t afford it did their best to dress respectably, or they wore classic styles from previous seasons. Unlike today, most people were embarrassed to wear clothes that were torn, patched or otherwise “grungy”.  While “dressing down” is still acceptable in the 21st century, there is a strong trend towards glamour in today's recessed consumer market, fueled by the unswerving good taste of creative fashion designers and boosted by the television and film industry.

From The Movies to the Runway

Hollywood has always been a huge influence on the fashion scene. The 2013 film version of “The Great Gatsby” dazzled audiences with the fashions of the 20's and the costume designer won the Oscar.

Today, TV has just as much of an impact. What we’re seeing now is the well-produced, period-piece television series showcasing stunning fashions of yesteryear in glorious high definition.

The talented costume and production designers responsible for HBO’s revival of Mildred Pierce as well as their original series, Boardwalk Empire give audiences a magnificent re-creation of the styles of the 1920's and 1930's. The fashions are not simply historically accurate, they are spellbinding and inspirational;  so much so that today’s savvy fashion designers have taken their cue to bring back the glamour.

Both TV series debuted in the Fall of 2010 which may be why we are seeing more fur, metallics, wool plaids and checks on the runways even into 2014.

No Maxi Shoulder Pads this Time Around

The high brow fashions are historically correct, but they're also irresistible to today's fashion conscious consumer.

In the original 1945 film, Joan Crawford (as Mildred Pierce) solidified her often caricaturized power image by wearing severe suits and coats with enormous shoulder pads. In the HBO revival, Director Haynes and designer Roth nixed the padding, keeping the clothing historically accurate for the 30's and coincidentally, very well suited for the female professional of today.

Don’t be surprised if you’re mysteriously captivated by the power suits and the many fabulous fur stoles; so glamorous and gutsy, they defy political disapproval.

Check out some savvy reasons why wearing fur is environmentally responsible.

HBO’s Boardwalk Empire which begins its second season September 25th, 2011 is another fashion trend-setting television series. The phenomenal cinematography is matched only by John A. Dunn’s brilliant designs of the Prohibition era.

The fashions of the 1920’s were edgy. They expressed a blatant disregard for the staid traditions of the past (and the law). It wasn’t only the women who rejected the drab colors and puritanical styles of the previous decades,  the men also embraced their inner glam by sporting bold colorful plaids, pastels and contrast collar shirts.

Plaids and checks are timeless. Over the past few years the genre of rugged masculinity in plaid and checked shirts, sports jackets and outerwear has been earthy, as in the sportsman or lumberjack look. Today, boosted by a new appreciation for the trends of bygone eras, designers have elevated colorful plaids and tartans into the realm of luxury and ancestry.  The plaid styles in knit fabrics originate primarily from Scotland. Made popular by kilts, garments were crafted in various colors identifying clans, aristocratic lineage and heritage. Whether formal or casual, plaid and its close cousin, checks, are now quite posh.

The colorful designer mens jackets and suits of today are following the tartan trend and they're as powerful as those worn by the tough gangsters of the 1920's as  featured in HBO's Boardwalk Empire.

Despite the economic depression of the current era, the price of men’s plaid suits and blazers have become more aristocratic as well.  Designer plaid jackets can range anywhere from $100 to over $1,500. Just remember, a good wool plaid is not only a sharp fashion item that can last for years, it will keep you toasty warm. Make a tough, timeless statement by wearing it with a contrast collared shirt (another timeless style from the 1920’s) and brightly colored tie.